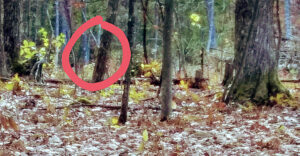 A husband and wife living in a remote corner of Fayette County in southern West Virginia claim to have encountered and photographed a bigfoot.

Billy Humphrey, of Danese, says that before the October 2019 incident he had ridiculed such claims but has spent the last half-year turning the encounter over in his mind.

According to Humphrey—a hunter, coal miner, and former U.S. Marine—the encounters occurred in late October in the woods near his home where he’d set up a hunting blind.