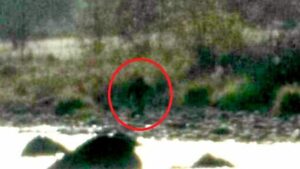 The legendary Bigfoot and other creatures like it have reportedly been spotted near a Northern California lake, according to a paranormal investigator.

Jeffrey Gonzalez, a self-described paranormal expert, said he heard about the sighting from a local farmer who said he saw the creature and five others running on his ranch near Avocado Lake.

“One of them, which was extremely tall, had a pig over its shoulder,” Gonzalez said in comments obtained by Fox 26, a Fox News affiliate. “And the five scattered and the one with the pig was running so fast it didn’t see an irrigation pipe and it tripped, with the pig flying over.”