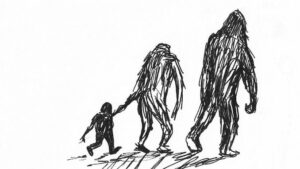 North Carolina author Donna Campbell Smith’s new novel, My Neighbors from the Woods, is a departure from all of her previous books. Some folks might say it’s a fantasy or paranormal story. That’s because they don’t believe.

The story is about a woman the writer calls Maggie. Maggie lives alone in a small house in the middle of twenty-five acres that butts right up to a national forest. She enjoys her solitude, though she is not a recluse. She socializes with friends and attends the local Presbyterian church at least once a month. She knows most everyone in her area. At least she thought she did, until she met her new neighbors. Maggie isn’t her real name, but for the story’s sake that is what we’ll call her. She can’t say where she lives, other than somewhere in the South — for her own protection as well as theirs. Her hope is that her neighbors will continue to live in the woods long after she is gone from this world. The story is told in her own words. You may think it is the ravings of a madwoman, but she assures you she is as sane as any one of you reading it.