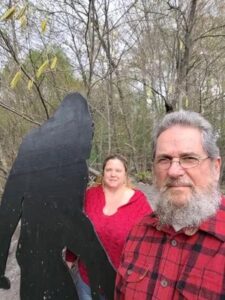 The search for Bigfoot, the large hairy animal, that has evaded capture for decades, will be the focus of a new festival June 11-13 in Marienville that borders the massive Allegheny National Forest in northwestern Pennsylvania.

Dave Yeany, one of the organizers of the Forest County Bigfoot Festival, said he and his wife, Zenobia, were sitting on their porch thinking of ideas to attract people to their community. “My wife said, ‘Do you know what would do really well – a Bigfoot festival.’  And I agreed,” Dave said in a telephone interview.

They took the idea to the Forest County Business Alliance as a fundraiser more than a year ago, and the idea has really taken off.  The event, including a hunt and calling contest, will be headquartered in the town’s circle.

Our Guarantee: If a Sasquatch, Yeti, Abominable Snow Monster, Ohio Grassman, Yowie, or Big Foot bothers you or your belongings after properly applying Squatch Away!™ we'll send you two cans of our latest formulation.

Squatch Away!® is
Specifically formulated to
not disturb the
Endangered
Pacific Northwest
Tree Octopus!